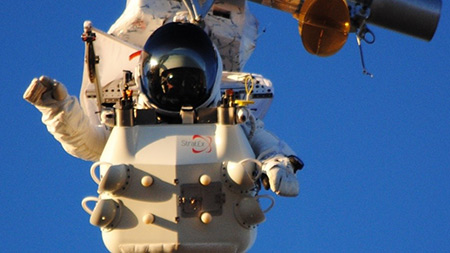 With little fanfare, the Paragon team opened the stratosphere to manned exploration with the StratEx Mission, an accomplishment that set three world records which all stand today including exit altitude of 135,890 feet (which is nearly half-way to the Karman Line); freefall distance with drogue or stabilization device; and vertical speed with drogue. The maximum descent velocity of 822 mph – faster than the speed of sound – allowed Alan to become the second person in history to intentionally break the sound barrier outside an aircraft.

The StratEx mission was selected as a finalist for the 2014 Collier Trophy awarded “for the greatest achievement in aeronautics or astronautics in America” by the U.S. National Aeronautic Association. The StratEx self-contained suit and recovery system are permanently displayed at the Smithsonian National Air and Space Museum’s Steven F. Udvar-Hazy Center in Virginia.

This mission demonstrated what can be accomplished when daring spirit, vision, and teamwork synch together toward a common purpose. “We literally started from a sketch, yet in less than three years we were able to design, build and qualify our flight system, develop all of the operational assets and perform three flights to the stratosphere,” said Norman Hahn, StratEx Chief Engineer. “Prior to StratEx there were only two manned flights above 100,000 feet in 231 years of ballooning history. We did two flights over 100,000 feet in less than 10 days.”

“Alan’s StratEx jump was a spectacular feat, and this anniversary reminds us of what we can achieve and inspires us to embark towards new goals in space.” said Grant Anderson, President and CEO and co-founder of Paragon.

A renewed interest in the importance of space has been witnessed in 2019 with the 50th Anniversary of the Apollo 11 Moon Landing and NASA announcing its Moon 2024 initiative with the goal to put humans back on the Moon, an endeavor in which Paragon is playing a supporting role.

A trusted leader and partner in supporting mission critical operations for space, military, and commercial customers around the world, Paragon develops life support and thermal control solutions for extreme environments.