TUCSON, AZ (April, 2015) – NASA’s vision to have an American spacecraft launch from American soil and set off to explore deep space is one step closer to being a reality. On December 5th, 2014 the Orion spacecraft experienced a perfect launch and spent more than four hours in Earth’s orbit before performing what was called a “bulls-eye” splashdown in the Pacific Ocean. 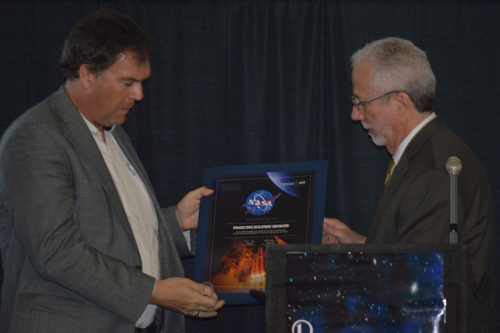 This launch was performed to test the critical parts of the capsule including the heat shield, parachutes and all the sections discharged during ascent and entry. Paragon Space Development Corporation provided the tubing for the life support system that controls everything from oxygen to heating and cooling as well a critical sensor package. For Paragon, years of hard work have paid off now that its hardware has flown on Orion.

“With unmanned tests like this one, we as manufacturers can see how the critical components hold up in high stress scenarios ensuring that when the flight is manned and under normal conditions everything works as it is intended,” said Grant Anderson, Paragon President and CEO. “With critical components like a life support system, you need to deliver to exacting tolerances and uncompromising quality so that the hardware performs flawlessly.”

Paragon is one of Lockheed Martin’s subcontractors who worked on the Orion spacecraft program. “With Lockheed at the helm, Paragon supports theirs and NASA’s vision to have Orion be the most reliable, safe and affordable option to provide human spaceflight to destinations in deep space including asteroids, around the moon, and Mars,” said Mr. Anderson.

On April 8th, 2015 the Lockheed Martin and NASA Orion Program Managers thanked the employees of Paragon for their contribution with a presentation highlighting the accomplishments of the entire Orion team along with a certificate for outstanding performance in their contributions to the successful Exploration Flight Test-1 mission.

NASA’s commitment to deep space exploration is set to have humans to set foot on Mars by the end of the 2030’s. With only two test flights planned before astronauts launch into space on Orion in 2021, NASA is on a clear path to have human footprints on the red planet.