Seven Aviation and Aerospace Projects and Accomplishments to Compete for the 2014 Robert J. Collier Trophy 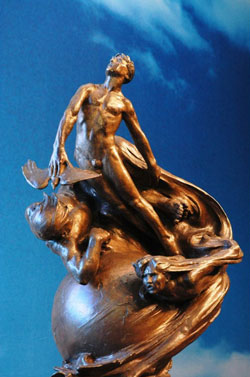 For 103 years the Collier Trophy has been the benchmark of aviation and aerospace achievement. Awarded annually “…for the greatest achievement in aeronautics or astronautics in America,” it has been bestowed upon some of the most important projects, programs, individuals, and accomplishments in our history. Past winners include the crews of Apollo 11 and Apollo 8, the Mercury 7, Scott Crossfield, Elmer Sperry, and Howard Hughes. Projects and programs which have been the recipient of the Collier include the B-52, the Polaris Missile, the Surveyor Moon Landing Program, the Boeing 747, the Cessna Citation, the Gulfstream V, the F-22, and the International Space Station. The 2013 Collier was awarded to the Northrop Grumman, the U.S. Navy, and the X-47B Industry Team for developing and demonstrating the first unmanned autonomous air system operating from an aircraft carrier.

The nominees this year are:

Led by NAA Chairman Jim Albaugh, the Selection Committee will consist of leaders representing organizations throughout aviation and aerospace. Included on the Committee are two former recipients of the Collier Trophy:

The Selection Committee will meet on Wednesday, March 11th, in Arlington, Virginia, and the winner will be announced that evening at the NAA Spring Awards Dinner to be held at the Crystal Gateway Marriott.

The formal presentation of the Collier Trophy will take place at a later date at the Collier Dinner in Arlington, Virginia. More information can be found at www.naa.aero.

The National Aeronautic Association is a non-profit, membership organization devoted to fostering America’s aerospace leadership and promoting public understanding of
the importance of aviation and space flight to the United States.